Welcome to my blog! Here you shall find informations about Ancient Gods of Slavs and Slavic heritage . My pendants and tea mugs collection with authentic design . Shar Pei breed info and manual , WoodCraft ideas. patterns and plans . Stay tuned! 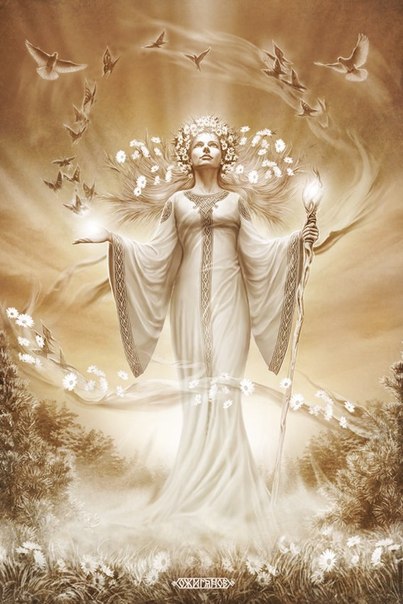 Živa, (also Živa, Šiva, Siwa, Żiwia), was the Slavic goddess of life, love and fertility. She was worshipped throughout what is now Poland, the Czech Republic, Slovakia, Slovenia and Germany (and especially the Elbe (Labe) river valley), before Christianity expanded into the area.
She was wife of one of the main Slavic gods – Dažbog – the god of sun. Together they showed up like twins creating the symbol of pigeon.
She was an impressive woman with long hair and powerful eyes.
Goddess Živa originated in the remote antiquity. The name of the goddess can be traced as far back as North Africa. Yet, the furthest we go back into prehistory, the clearer she emerges, not so much as goddess, but as life itself. The meaning of Živa in Slavic languages is life or living.


Among the deities of Slavic Polabians, above all Abodriti or Bodrici (Mecklenburg), the goddess Živa, or Živena among Slovakians, had a special place. Historical sources refer to her most often under the name Siwa, and recorded variously as Sivve, Shiwa, Sieba, Syeba, and Dsiva. She was goddess of fertility and love, the greatest female deity in the pantheon of Polabians. Tomaž Linhart, Slovenian 18th century historian, writes: Shiva, goddess of life; she was worshipped by Polabians. Raniolans have given this title to the planet Venus.

Živa was above all the goddess of water. In the consciousness of people she represented the concept of life, personified by water. She was their first “goddess”, even before mother Earth, who rules when the spread of agriculture follows.

The chief holy place of goddess Živa was in the city Ratibor (Ratzenburg), south of Lubice (later Lübeck). The city is situated on the island of a sizable lake. On the island a powerful stream gushes to the surface, named Aqua Siwa. Today there is a spa on this spot. We come upon goddess Živa in the mythology of other nations in Middle Europe, that stem from the ancient Veneti. In the tradition of Slovaks for example she appears under the name Živena. 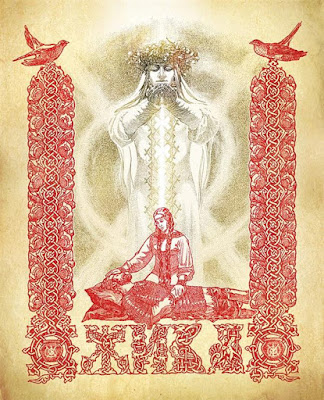 Chronicler Helmold calls Živa Polabian “goddess”, but in common with other chroniclers does not describe her. Her image appears only in the second publication of his chronicle in the year 1659. There are many indications that the goddess Živa was symbolically represented in the stream of fresh water, the source of all life. Her figure, which it would be evidently impossible to portray in its true symbolism reflects more than a female figure, - youth, beauty and tenderness, life and its renewal.... All that the later goddesses of love, for example Greek Aphrodite or Roman Venus express only to some extent.

Goddess Živa had vanished from memory, but the folk tradition has retained her figure and meaning in various guises. There are records particularly referring to “living water”, sometimes as focus of worship that indicates either by name or indirectly the goddess of life, Živa.

It is probable that the worship of Fata in Oglej (Aquileia),- a maiden goddess who foretells future, and is connected with births, can be identified with Živa. Like a number of Celtic deities, it would appear, as indicated on several preserved inscriptions, that she was transposed into the Roman pantheon of gods, and became Fata, dea barbarica.

There are no direct records about how much was Živa, her Polabian version, connected with the figure of female beauty and fertility. That she was an important goddess we may conclude from the fact that in the year 1157 they built a cathedral on the hill in Ratibor, where her temple had stood.

About her worship in Carantania there are also no records. However, Slovenian historian Linhart writes: Shiva, goddess of life; she was worshipped by Polabians, Raniolans have given this title to the planet Venus. Linhart’s record is of the essence in further pursuit of her presence in pre-christian pantheon of Carantanians.

There is a strong tradition that the temple, which preceded the Christian church on the Isle of Bled was dedicated to Živa. Diggings which archaeologists undertook on the island after World War II, discovered under the church remains of older foundations. Among them also the foundation, that provided the support for a square wooden house at the time of christianization in the 8th century. Attached to it was square building with apse from 9th century, an indication of the influence of Oglej. In both buildings, whose foundations were uncovered, transition from pagan “hram” to early christian church can be clearly seen. Was the pagan temple dedicated to goddess Živa? Christian missionaries consistently translated worship of pagan goddesses into the worship of Mother of God. Church on the Lake Bled is consecrated to the Ascension of Mary.
The temple of Živa on the Isle of Bled and the waterfall on the Savica River were commemorated and celebrated in the epic poem Baptism on Savica by the 19 century Slovenian poet France Prešeren. 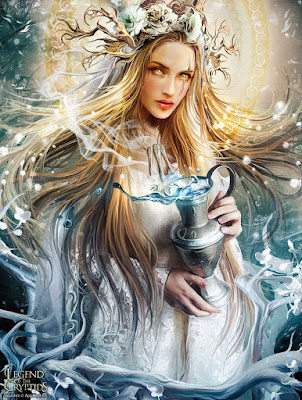 Goddess of living water has also been retained in the folk memory in many customs where water plays a crucial role. Maidens in the environs of Ljutomer make offerings to water on New Year’s Eve. In another custom a red apple must be thrown into the spring before sunrise. In her portrayal in Helmold’s chronicle, which had been published in 1639 by Heinrich Bangert, Živa holds an apple in her hands. From this it is possible to deduce, that in the folklore of Polabians as well, the apple was preserved as love symbol of the goddess.

The figure of Živa, the ancient goddess of water, fruitfulness and love did not completely vanish from Slovenian folklore. Christianity drove the name of the pagan goddess into oblivion. However her image has been preserved in tales and myths about white woman (orig. Sl. bela žena) the washer-woman (orig. Sl. perica) or god’s maiden (orig. Sl. božja deklica), and in seasonal customs centred on springs and wells in Slovenian folk tradition.